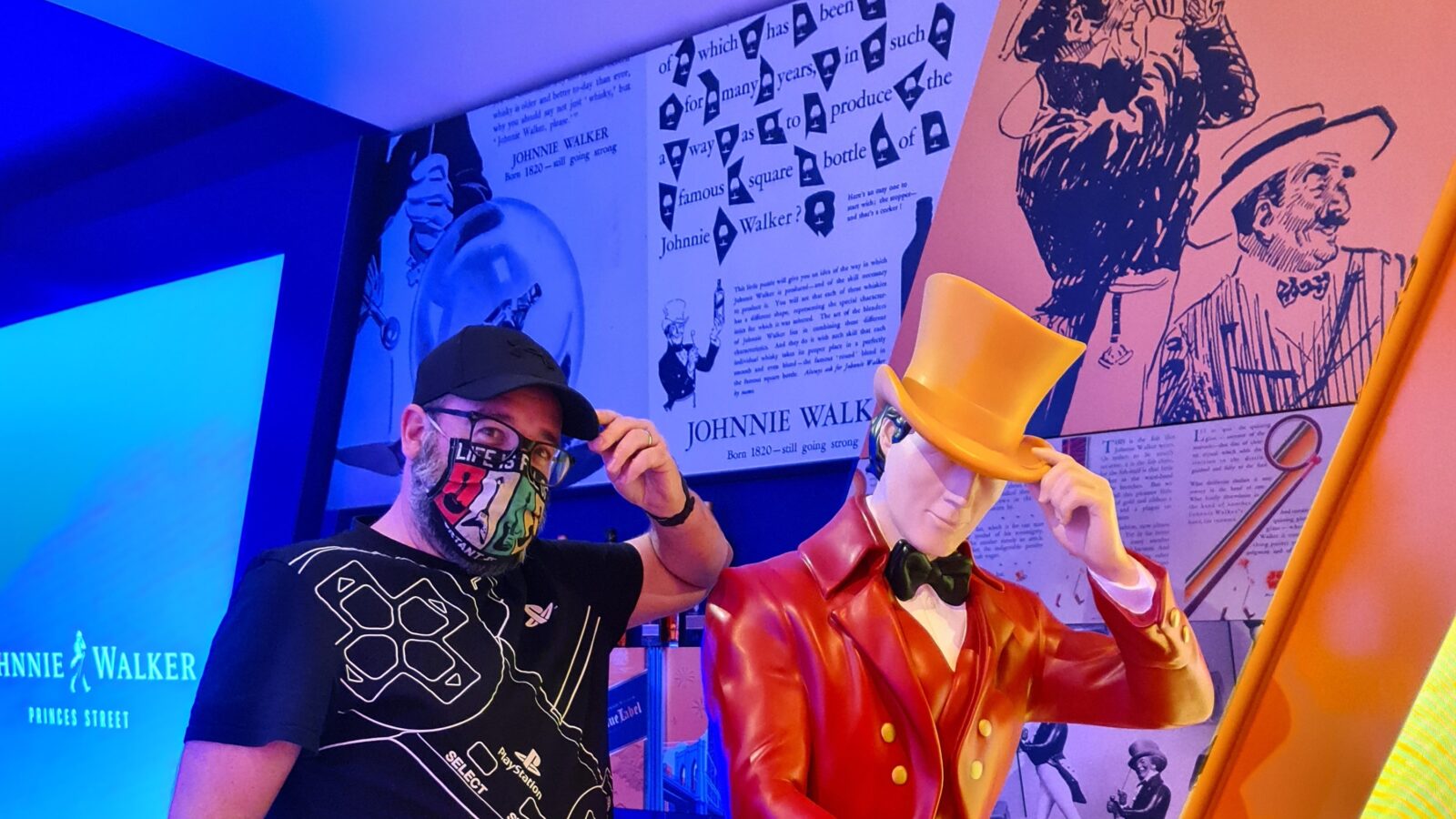 Eddie Vs The Johnnie Walker Experience

So I undertook a road trip last weekend, mainly to visit a friend, Dr. Andrew Forrester of SMWS fame. I was actually quite looking forward to getting away for a few days and thought it would also be fun to go and do something a bit different.

Ok. So going to a whisky-based attraction might not sound that different for someone who works in whisky, but let's not go crazy right?

I actually booked the experience at TJWE (I am not typing the full name every time I mention it, sorry) some weeks ago. Knowing I was going to be staying close to Edinburgh, I was curious about this new 'thing' and I thought it might be fun.

The outside of the building - particularly in the cold drizzle of that particular afternoon - its quite understated and does not give you any clue as to its contents.

However, step in and you are soon enveloped into the world of Disn...I mean Johnnie Walker. Bright, garish and full of buzz and tourists. It really is as far removed from the distillery visit of old (which can still be had, thankfully) as is possible. It is very impressive and Diageo have clearly, in the words of John Hammond 'spared no expense'.

Talking of Jurassic Park, the presentations that comprised the 'Journey of Flavour' that we undertook, certainly reminded one of a highly polished attraction. Thankfully Diageo have drawn the line at resurrecting Port Ellen, rather than having a go with T-Rexs and the like. But there's time I guess.

However, before we could enter the experience, we were asked to answer a few questions about personal flavour preferences on iPads. How much do you like Rosemary? What about toffee? To be honest myself and friend probably did not give this a huge amount of thought as we were running short of time. But what we didn't realise is that, based on our answers, were then each given a different coloured wristband. Mine was blue - signifying smoke apparently - whilst Dr. F's was beige. I can't even remember what beige signified. But I was happy to not be beige. And even happier that Dr. F was.

After a brief and vibrant introduction, where we were told that the experience was all about 'smashing myths', such as you must have a beard to enjoy whisky (works for me) and you mustn't drink whisky in cocktails (more of this later).

Fair enough, we thought. We're all for that. Even this fuddy-duddy likes an Old-Fashioned or three and likes the old myth-buster.

So, we were then beckoned into a long room, with what appeared to be a very long stage with a young lady sat at the very end, reading a book. The 20 of us sat down, awaiting whatever it was that was about to happen.

And then. Wow. Just wow.

What followed was essentially Johnnie Walker - The Musical.

It was brilliant. The effects, the lights, the music, the performance by said young lady. Absolutely incredible and the only thing missing was somebody breaking into actual song. I honestly think they could have got away with it. We were in rapture and the applause was ample.

Next we found out what the wristbands were for...

Ushered into an almost sushi-bar looking joint, we were told that the High-ball is now the coolest way to drink whisky. Ok. I'll buy that. So we had to pick up a high-ball glass with the matching colour base to our wristband. We then had to put 4 cubes of ice (no more, no less) and then place said glass underneath a futuristic coffee-making looking device. This device then, cleverly, poured out a high-ball combination of whisky and soda, based on your wristband colour. Mine was JW Double Black (a more heavily smoky version JW Black Label). We were then instructed to put the correct garnish. Mine was sun-dried tomatoes.

At this stage I found myself getting irritated with other customers close, one of which decided it would be fun and correct to just stuff every garnish into his High-ball. Yes, that is the kind of thing that irritates me. Sad, right?

Anyway, the highball was tasty enough.

We were then shown through to another room in which it almost looked like Dr. Frankenstein's lab. 4 round tables with what looked like fruit and plants suspended in formaldehyde. The four tables represented the single malts we were told provide much of Johnnie Walker's character. They are Glenkinchie, Clynelish, Cardhu and Caol Ila.

Once the character of each had explained, there then followed another Jurassic Park like animated presentation, projected onto the walls surrounding us, and the props attached to them. Very impressive and a really clever way of explaining the whisky-making process to newcomers, particularly.

We were then ushered into yet another room in which the blending process was explained in a kind of Starship Enterprise kind of arrangement. More lights and lasers and Dolby Atmos and incredible production value.

Lastly we were invited into a shiny, contemporary cocktail bar. We were told that we had 2 more drinks and only 20 minutes in which to drink them. Fair enough. The drinks were more High-balls or even Old-Fashioneds. You could also ask for the drams on their own - as many seemed to prefer - but I didn't spot this until I had already ordered my first drink.

Finally we were allowed to leave. I have to say that the cocktail bar was the only part of the experience we felt let it down in any way. It just felt a bit 'flat' and boring compared to the rest of the event, but perhaps they wanted to wind us down a bit from our adrenaline-fuelled adventure.

So the final part of our adventure was being dropped off back in the Disn....I mean JW shop, where we had a little look around the impressive (and not too expensive) whisky specialist shop. If you want to pick up some Diageo single malts, such as the under-rated Flora and Fauna series and the more premium 'special releases', you can do that here.

Ok, so the basic experience, that we experienced, was possibly not aimed at an old whisky stalwart who has done one or two distillery tours, etc. There was a lot of preaching to the converted, but that was certainly not their fault, and certainly not a fault.

As far as the experience, I can really not fault it and the hour and a half went very quickly and I would say at £25 per person (which I baulked at, at first, obviously) is actually very reasonable, given the amount time, effort and money Diageo have clearly spent on this magical kingdom. I paid for the tickets myself, by the way, just in case you were wondering!

It was fantastic. I would highly recommend our experience to those with a burgeoning interest and wants to learn more, particularly about Johnnie Walker. It is a fitting and stunning tribute to Johnnie Walker himself, and extended family, and long over-waited.

BUT. And I hate to pick holes, as you may know.

Myth-smashing is definitely a good thing. We're all for that. It was therefore a bit disappointing to hear some myths, that have been 'smashed' some time ago, being reinforced here.

Caol Ila's maritime character being due to the casks being matured at the distillery, alongside the sound of Islay anyone? Many have known for some time (and should know, if they don't already) that most, if not all, Caol Ila's new make is tankered off the island to be matured in Scotland's central belt, on the mainland.

There is no shame in this. There is simply no space to mature stock at Caol Ila. Especially given that it is, by far, the largest distillery on the island, capacity-wise.

But just be honest about it. The character is produced by the barley used, the mashing, fermentation and distilling equipment used, and the expertise of Diageo's distilling team. No shame in that whatsoever.

There were a couple of other clangers like this, but as I said previously, the experience and information other than this was spot on. If Diageo would perhaps iron these out, it would be almost perfect.

Almost? Well, nothing is perfect, particularly whisky, and that is partly why I love it so.

Thanks to Dr. F for accompanying me and putting up with the usual Eddie bs.